The question is, why would you need a GI ostomy? Several health conditions might necessitate you to undergo GI surgery. These conditions or reasons include ulcerative colitis, diverticulitis, Crohn’s disease, cancer, obstruction, and injury.

What is a colostomy?

A colostomy is when the surgeon decides to bring a part of the colon out through the abdominal wall to create the stoma, which is an opening to pass out the stool. You get a colostomy when a part of your colon is healthy enough to function. The surgeon will either remove or rest the diseased section of the colon.

What is an ileostomy?

The type of stool you pass out depends on where in the bowel you have got the stoma. A more distal stoma in the bowel will result in a more formed stool. Similarly, a more proximal stoma will pass out the more liquid stool. An ileostomy bypasses the entire colon, meaning that it generally passes out a more watery stool. Because this stool has a high content of corrosive digestive enzymes that could have been absorbed in case the colon was intact, it can pretty harsh to the skin around the stoma.

The stool consistency of a colostomy varies with the types of colostomy.

Nursing care starts before surgery. The nurse has to tell the patient about what to expect with a stoma. They also have to teach the patient about ostomy pouches. They generally follow instructions of MD when it comes to preoperative medication.

After surgery, the nurses have to monitor the patient’s stomal output. They look at the electrolyte content passing out along with the stool. It helps them assess the risk of dehydration.

The stoma should be red or pink and moist. Nurses notify doctors when the stoma changes its color to pale pink or dark red.

The doctor will generally suggest you follow a modified diet plan until your bowel recovers after surgery. After your bowel recovers, you can introduce your favorite foods back into your diet through a gradual process. You may have to have high water intake to make up for the loss of water that happens during every stool evacuation.

You can talk to your nurse or doctor if you have any questions regarding any aspect of ostomy care. 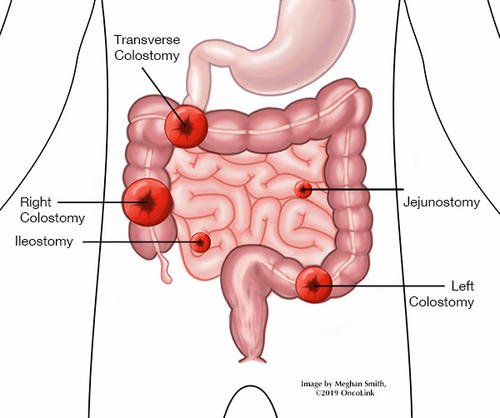